Improving Smoke Extraction in one of the Largest Cylinder Head Foundries in Central Europe – Part 2. 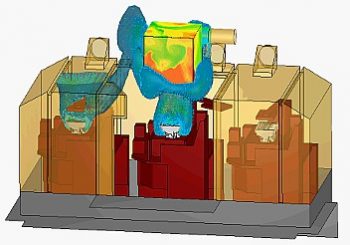 In the previous part I showed how the simulation of the original smoke extraction system of the casting machine that produced many hundreds of cylinder head castings was made. In that simulation, which represented the first step of the development project, the characteristic, time dependent pattern of smoke generation was created and validated against  the real life operation of the machines. The thick white smoke the casting assembly emits has to be handled by an extraction system which is connected to the machine cover.

Productivity of the factory had been increased so much since these original machine covers were installed, that the old extraction system was not able to keep up with the increased pace of smoke generation. The extraction system had to be redesigned and rebuilt fast.

The picture on the left shows the big blue volume that represented a portion of the surrounding environment into which smoke could escape. The top orange coloured surface of this volume was the place where concentration of smoke was measured in case of the original and all modified cover versions. This concentration was the criterion upon which the efficiency of a new extraction arrangement was judged.

The smaller the concentration was and the less smoke escaped the cover, the better.

These concentration figures belonged to the original structure and flow pattern below:

While designing the new extraction system and machine cover we had to keep many restrictions in mind, which seriously limited our freedom to make changes. Well, first there was the automatic ladle, which could just slip above the machine cover, it could not be raised any further. Pictures below show the space the ladle occupied while in motion during casting cycle. This space was off limits. Our only luck was that the ladle took this space for only a short period of time in each cycle and was parked away from the machine otherwise. It was also moved away by the time the manipulator arrived above casting position 3. This meant that the ladle was not in the way of designing a larger manipulator cover.

But all this was true for the automatic manipulator too, that removed the freshly cast and smoking cylinder head from the machine. It had its own extraction hood taking much more space than the ladle. But its design had to be reviewed because it was not very effective. That meant we would loose even more space because of the enlarged manipulator extraction hood. On the figures below the red volume shows the space the manipulator takes while moving during a casting cycle.

Our general aim was to place smoke extraction features as close to casting positions as possible and to build in extraction hoods with the largest possible volume.

More than ten versions were tested with CFD simulations and the solution below had the best performance in terms of concentration values.

Important change of the new extraction system was that one of the original extraction pipes connected to the main machine cover was abolished because of total inefficiency in its original position. Its extraction capacity was redistributed to increase extraction from manipulator hood.

In position No.2. we had no chance placing the same elevated extraction hood above the casting because of the manipulator. Even the original manipulator cover slid 10cm above the machine cover, and the new grew even bigger in area to cover the whole opening above position No.3. So it was decided to place a smaller hood approaching the casting from the side, turned to and reaching towards the die as close as physically possible. Extraction pipe was led back in a similar trench like on the other side. Below is the animated result of the smoke extraction simulation of the best performing design.

Even the animated results showed that way much less blue plume (representing smoke of course) escaped than in case of the original configuration. Concentration results just confirmed that too.

If the best performing modified and the original extraction systems are compared we see a concentration rise in extraction pipes No.1-2. This means that their smoke extraction efficiency has increased. Extraction pipe No.3 ceased to exist, its flow rate was redistributed among the other three extraction pipes in a way that we doubled flow rate extracted through pipe No.4.

Concentration of pipe No.4. decreased because more smoke is mixed in with much more air. Concentration of Top Opening decreased by 79% but it did not become 0%. It was so because of the less efficient extraction at position No.2. and the smoke escaped in the gap between machine cover and manipulator hood.

The new extraction system on the test casting machine surpassed all expectations. It was able to handle non-standard situations like die opening (intensive smoke release) while the casting was still under the machine cover instead of in position No.3.

Plant design specialists of the foundry made some minor adjustments and fine-tuned the concept by using every available inch so the final design did not let any smoke escape the extraction system. Air quality of the foundry improved significantly.

This particular foundry spent tons of money, did not spare neither time nor resources to consistently eliminate all possible air contamination. Fresh air supply was also improved to suit changed extraction conditions. When the whole system is up and running at full capacity, even 4 million cylinder heads would mean no challenge.