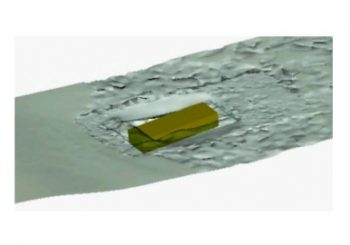 Ships are somehow special. They have an aura only a large vehicle has. It’s not like a car  you jump in and the interior can be assessed in a twinkling of an eye. A big ship is different. You need to rove, you need to know every corner and passage or even find your way out if your are lost. If you have ever been on board of a big ship, especially on board of an old warship and touched by the spirit of the place, you know what I mean. Some of these ships were floating cities, home of 1,000 men for months.

Today, ships are built with dimensions bigger than ever. HMS Belfast seems to be a punt compared to the giant ocean liners that take more than 5000 passengers from one destination to the other for example on the Caribbean Sea.

But there are big ships in the gas and oil drilling industry. Many of them are tankers but floating refineries are also constructed. I got in touch with one of the latter because of a project and I had the chance to commit a few simulations on a 355m long, 58m wide giant having the daught of a mid sized office block (21 metres).

This article can’t say a word about the real job, but I made some tests in the preparation phase that are quite good for showing how SC/Tetra handles free fluid surface with waves and floating objects.

Testing of a software function always happens on a simple geometry in order to have the simulation run fast and give a chance for the problems to arise quickly at the very beginning of the project. I did not overcomplicated the model, just used a 350mm long and 125mm wide wooden block that submerged into water by the half of its 100mm thickness. The picture below shows the simulated system and the fact that blue coloured water and the air above it are made of 4 pieces has a significant meaning.

This is because we need a surface where generation of waves is defined (this is the vertical surface between blocks 2. and 3.) and volumes are needed before inlet and outlet to suppress the effects of waves (volumes 1. and 4.).

Suppression is required because without it waves hitting these surfaces start traveling back into the simulation domain and these waves would jam both the frequency and amplitude of the originally generated waves. Suppression affects energy of waves and it is controlled by a function the user can tune in a way that waves at the inlet and outlet will completely disappear.

Well, we know how to suppress waves, it is time to check if we can generate them. SC/Tetra uses WGS (Wave Generation Source) method that applies an artificial mass increase and decrease at the chosen surface that is inside the simulation domain.

Depending on wave period and height and water depth different types of waves can be created in SC/Tetra, like:

Apart from using this model to test wave generation it was a perfect fit for trying two more functions. The first one was the head current, because water flew with 0.25 m/s towards the wooden block and the second one involved some restrictions of the degrees of freedom of the wooden block. Namely I only allowed it to rotate around its axis parallel with its shorter 125mm side and it could move along a vertical line. With this I modeled the fact that the ship was anchored so no movement back and forth and to the sides. On the other hand it was capable of tilting and following the change of water level by moving vertically with it.

A little bit of comment on the video. The first thing the block did was to rise as much as its density and the lift force from the water allowed. When wave generation started it smoothly followed heights and valleys but since head current of 0.25 m/s and waves at its front side could not push it away, its front side meant resistance for the water and at some point water started flowing over it to the top surface. When the ride got bumpy so much water flew over the top that the block flips forward and head current turned it upside down.

Commenting continues on the picture below where I highlighted the location of wave generation with a blue arrow. The two green arrows show the location of suppression volumes while red arrow points an area where free water surface sinks below the level I expected and enters into an area where I did not make such a fine mesh as I used close to the initial surface.

Talking about mesh: on the next picture mesh of the block and its surrounding area can be seen where type and size of elements can clearly be distinguished. Base mesh of water and air domain is simple: these are the areas where – theoretically- only water or air can exist. Size of elements (length of an edge of a square) there is 4 cm. Between those two „clean” areas there is the intermediate zone, the wave area where altogether 20 layers of 1 cm prismatic elements are generated to provide a nice and smooth free fluid surface. This is the mesh from which water surface moved out at the red arrow.

Care should be taken when creating the mesh of master region where masking could be possible. The most important rule is that mesh size of master region must be equal to or smaller than the elements of slave region namely the wood block and its envelope.

Here comes a video of the mesh while the block is in motion.

The method tested here worked out perfectly for the 355m long big ship with the only difference that it did not flipped upside down at the end.