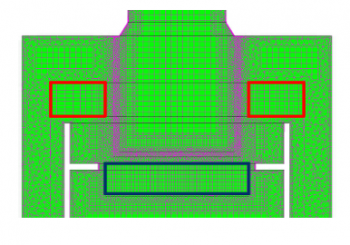 Once the technical director of a company that engineers HVAC systems for the built environment asked me, when the time would come for the computer simulations to make traditional engineering calculations and design methods completely outdated? As far as I see it, computer simulations and engineering experience should walk hand-in-hand. More to that, I think simulations will not make fast hand calculations obsolete either. My view has been confirmed by one of our fluid dynamics motion simulation projects, in which movements of a pipe system under external and flow induced loads had to be determined. And again we only had a few hours to do the job.

I was contacted with a request, whether we could simulate the motion of a pipe system that was submerged in water, had water flow in it and was under dynamic external load. Sure, I said, any deadline? Yesterday. Really? Really. Okay, then we find a calculation method which delivers flow induced forces by using CFD simulation. This is then combined into a manual calculation to sum up all forces. And this hand calculation would tell if motion of the pipe is larger than the 10mm limit set by the client. Would that be okay? Yep, get on the job.

Water flow within the pipe arrived through the blue coloured pipe at the bottom. This pipe was fixed to the light grey pipe head and these two together were able to move along a vertical line (in z-direction). Water flowed through the red filter and left the pipe system upwards. Motion of the pipe meant that it was lifted from the connection plane shown by black lines.

To figure out the sum of forces that would move the pipe, we had to determine all forces (with magnitude and direction) induced by the internal water flow. For which we used a handy-dandy CFD simulation.

I chose the fastest, and simplest of all, a steady-state one. The pipe was in its normal position, sitting on the contact surface of its support structure, while water was flowing upwards with v=3m/s.

Resulting flow pattern lacks any fancy features, apart from the area around the filter, which is highlighted with red lines in the left picture. This filter had a 50% free area ratio, so it increased pressure loss significantly.

This was why not all the water flowed through its horizontal bottom plane, but a considerable volume passed it in the gap between the lower corners of the filter and the smaller diameter collar of the pipe head. In this gap flow sped up (shown by the green colour of the scale) and entered the filter near the top through its side.

This simulation was finished quickly and SC/Tetra (the CFD code we use) calculated and collected pressure and viscosity related forces acting on the surfaces of the moving pipe. This is how they looked:

Easy to see that due to the vertical flow and the axisymmetric geometry lateral forces were minimal compared with the vertical force component. So the lateral ones could be neglected. The vertical (positive z-direction) force component of Ffz=258 N wanted to lift the moving pipe. On its own it was just as enough to raise a 10ton pipe as if you wanted to lift a truck but combined with the external force their case was not that hopeless.

In reality external forces vary on a highly complex manner: they increase or decrease in time as the support structure moves. In this example I simplified reality quite a lot. In the picture below the orange line represents the time-varying external force:

In our test the process lasted 3 seconds: between 0 – 1.75 seconds the external force was  98092 N, then between 1.8 – 3 seconds it was 97042 N. If flow induced force of Ffz=258N which we presumed to be constant was added to it, the sum of forces as a function of time could be drawn the way as the blue line shows it in the left picture.

Adding up the sum of external and flow induced forces and the weight of the pipe, there was a net force of F=350N between 0 – 1.75 seconds that could actually and truly lift up the pipe from its support platform. Between 1.8 – 3 seconds we had a net force of F=700 N pointing in negative z-direction that pushes the pipe down towards its seat.

How can we make all this into a distance? The answer comes from Newton’s 2nd law of motion.

This law states that the net force acting on a body equals its mass times its acceleration. In short it is F=m∙a. In both the lifting and the sinking stages net F was known, because it was 350N for 1.75 seconds and 700 N for 1.2 seconds.

Distance travelled by the moving pipe came from the multiplication of average velocity and time, which gave us d1=v1∙t1=107mm for the lifting and d2=88mm for the sinking stage.

Since calculated distance in the lifting stage was 10 times bigger than the limit given by the client, I was quite sure about the answer to the initial question. Yes, the expected distance travelled would be definitely larger than the 10mm allowed maximum.

The real-life project would end here but in this example the comparison has just begun. What does the simulation tell us?

Because of the motion simulation, both CAD model and mesh had to be prepared for special challenges. I set up the simulation so that red and blue coloured volumes in the left picture showing a section of the mesh, would be able to take the mesh shrinkage and expansion without causing calculation issues.

These volumes were made by extruding 9 layers of mesh 14 mm thick each, starting from the top surface of the regular surface mesh. These 9 layers of prism elements could stretch or shrink with no trouble at all. This property gives us the freedom to use them in various applications where mesh deformation is involved. We had to take extra care when creating the mesh for such a simulation, but after finishing that, boundary conditions could be set up in no time.

It was just as easy and fast to evaluate results because SC/Tetra automatically collected motion data in a text file. This included flow induced force, travelled distance, pressure loss just to name a few. All of them were written as a function of time throughout the simulation.

If a 100mm rise were allowed, the 1023 Pa increase in pressure loss (from 9661 Pa to 10684 Pa in the highest point of the pipe travel) would also have to be taken into account in later stages of the pipe system design.

And the most important fact of all was that according to the simulation the pipe was lifted by 96mm from its support. The difference between hand calculated and simulation results came from the fact that flow induced forces acting on pipe surfaces did change during pipe motion. Because the flow patterns around the filter had been changing continuously. Remember, we made only one simulation run to determine flow induced forces in the hand calculation part. We did that in the baseline position of the pipe, which was resting on its support structure.

For this example it really took a few hours to complete the hand calculations using a single steady-state simulation. On the other hand there were quite a few challenges with the motion simulation, especially with creating the suitable mesh that behaved well while its size changed. It could be managed no problem, but took a lot more time.

As you can see, sometimes it is quite useful to remember science subjects from secondary school, if you have just a few hours to deliver results. Also it is satisfying to know that the results from two calculation methods ended up so close to each other. No wonder at all, since even the Japanese high-tech motion simulation is based on Newton’s 2nd law.