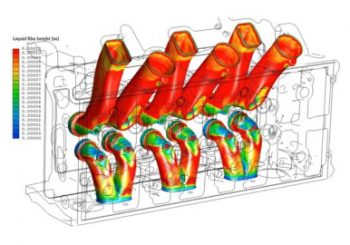 In the previous part I wrote about how effective and flexible meshing had been with SC/Tetra when simulating many extraction head versions for the cylinder head vacuum-cleaner. When I wanted to analyse a new extraction head I only had to change and remesh that specific part and attach it to the main mesh again and push GO button.

As I wrote in Part 1. the final goal was the reduction of energy consumption of the cleaning cell. According to the new idea coming from DELTA-TECH Hungary compressed air was not blown in by hundreds of injector nozzles but using an industrial vacuum cleaner small aluminium particles were extracted from casting cavities. The Austrian original blowing type design consumed let’s suppose 12kWh energy in the form of compressed air, that was reduced to 10kWh after appling results of our simulation in 2013. A vacuum cleaner would do it 6kWh and 8 m3/min air volume flow, so 60% of the already reduced energy, if extraction heads were properly desinged.

The only way you can properly design the extraction heads is to know what is going on in them and in the cylinder head casting. Because nobody can see inside cylinder head channels while cleaning here comes computational fliud dynamics into the picture.

In order to judge wheter one version is better than the original injector type design in terms of cleaning performance we need a quantitative measure. Of course apart from the number of removed particles. But particles can only be simulated in a transient analysis that would be way too time consuming to calculate for every extraction head version.

So we had the measure and to have a reference average friction velocity was calculated on each surface of the cylinder head where particles were genereated. These averages became  our basis for comparing the original air injection and the new air extraction methods.

Steady-state simulations had be to run with the new extraction heads until results better than the reference were reached. As examples let’s take a look at some cross-sections of the cylinder head in case of an intermediate design stage of an extraction head. A red line on  casting photo shows the location of the given cross section.

The table below summarizes results of the reference and final new version.

Since steady-state simulations – without particles – showed good improvement over the original multi-injector design it was time for making things more complex and addig some particles to the model.

During particle tracking simulations I was looking for the best suitable operation timing for our extraction heads. Since the extraction heads had two or three outlets each could be opened by a valve, valve opening times could be optimized to reach maximum particle removal performance. On the figure below blue line shows the number of extracted particles in time while broken lines show valve opening and closing times and extraced volume flow rates.

In this example valves shown by orange and yellow lines were operated first for three seconds each. On the blue line at 6.4 seconds we were at 230 extracted particles (out of 280 altogether) and it is clearly visible how the intensity of particle removal decreases: curve is getting less and less steep. At 6.4 secs the valve shown by green kicks in and by 10 seconds 255 particles were removed out of 280, however blue curve became almost flat. This told us there was no point in pushing things further this way, this valve opening configuration had reached its efficiency limit.

At 10 seconds all five valves were open and all 8 m3/min air volume flow was applied on a way that valves shown with broken blue and red lines got more than the others (they are higher than the others on the graph). Particles liked the idea and started to leave the casting channels again. At 12.5 sec when things ended 279 particles were removed out of 280, blue curve became flat, no more particles could be removed this way.

Let’s see where we are at compared to the reference. The original multiple injector design left 5 particles in the casting after 8 seconds of operation, all of them could be found in water jacket area, very hard to fully clean with air. Not a problem though because one of the next cells does cleaning with high pressure water, that usually whipes them off.

The vacuum-cleaning method left 1 particle after 12.5 seconds of operation, again in the water jacket. Being a bit slower than reference is also not a problem because cycle time is 40 secs, we are good to go this way too.

Just for the sake of curiousity we made simulations with 5secs maximum cleaning time and 8 m3/min air volume flow. The picture below shows that this does the job reasonably well, however instead of 5 particles of the reference, here we have 7 particles left in the cylinder head. If someone would be interested in reducing cleaning time, we could do it at the price of leaving some more particles in the casting.

Apart from the above a new feature of SC/Tetra was used for this geometry, a feature that did not exist in 2013 while making reference simulations. This feature is called liquid film simulation. The engine plant was quite interested because casting surfaces were covered with thin film of cutting fluid and they wanted to know its thickness change during air cleaning.

Simulations made in 2013 for the largest engine manufacturing factory of the world resulted in 10000 GBP/year worth savings in energy bills for that single cleaning machine. At the beginning of 2015 in this very plant 50(!) similar machines work with the same optimized and proven parameters as the first one. Well, as I usually say, a good CFD simulation project is definitely worth the investment.