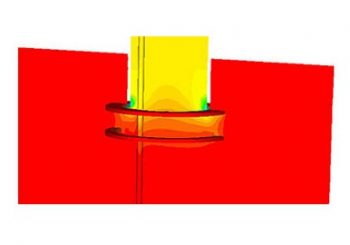 It was on a hot day in July 2008 when at 10:42pm I got the first message with the subject “Top urgent, top secret”. Let me tell you a five day long story of competing against time and a sales person that handled facts rather flexibly.

It was many years ago when we were assigned to determine the pressure loss of two seawater suction lines. The flexible hoses were 100 meters long each, they had steel fittings on both ends. Where do you think one needs 100 meter long hoses for which the pressure loss is critical?

Of course for the oil drilling industry!  These hoses are connected to a ship with a complete refinery on board, this specific vessel has a name PAZFLOR. With other words these ships are called FPSO-s (Floating Production, Storage and Offloading units). From the deck the hoses are lowered into the sea and cooling water is pumped through them which is needed for the technology. The interesting thing in it is that PAZFLOR is one of the biggest FPSO-s ever built, this 120 000 metric ton unit can process 220 000 barrels of oil per day and can store 1.9 million barrels on board.

On the hose end in the sea there is a filter device called the strainer with the aim of preventing any lifeforms (sharks or divers or both at a time) from being sucked into the cooling water line. On the other end of the hose there is a steel fitting called the riserhead with which the hose is connected to the vessel.

So our task was the pressure loss calculation which was flavored by the fact that first results were required within 1 day (the detailed report was OK to be delivered on the second day). This job has found its best place, I thought. It was done on time, of course.

But there was a small problem: the bigger hose with DN550 inner diameter had 32% larger pressure drop than the design criteria. All simulations with fine tuned settings, mesh sensitivity analyses remained consistent about the fact that the pressure drop criteria could not be met with this inner diameter. This was written in the report. End of 2nd day.

On the 3rd day in the morning I got the next top urgent + top secret email. I am sure you know what was in there. How big the diameter should be to fit into the pressure drop limit? We got that, it was 660 mm.

On day 4, more emails came plus a phone call that shed some light on other facts. The competition of our partner could do it with a DN610 hose, so we must do it too. OK, I said, where can we change the standard hose system in a way that the effective cross section of the hose is enlarged a bit? Answer came that we needed to check the geometry of the special flange between two hose sections so as it did not reduce the cross section that much. Fine, we checked, made modifications and that helped. We also modified the strainer. This way it was a go for DN610. We were between late night of day four and dawn of day five, I could not count how many simulations we had run so far.

After some hours of sleep a new email arrived. The competitor’s sales rep swore to the life of his mother-in-law that they could do it with DN550. I knew it was impossible and the safes rep was playing a risky game.

I made an amendment to the analysis report in which I detailed all figures again what we calculated for the original DN550, I described the effect on the pressure drop of every subassembly of the system and stated that with DN550 it was not possible to fulfill the pressure drop criteria. Guess what happened?

The customer accepted the reasons and since the competition could not support his statements with such strong facts and figures, on day 5 our partner won the contract. And I could finally go to sleep.

Not all of our projects have so tight timing but from this story you can see that being fast or even faster than expected (building mesh and run the simulations in the night shift in order to present results so the agent of our partner can go to the meeting to support his case) plays a key role in making our job and this competency is worth millions for our partners.