Simulation of Carbon-Dioxide Spreading in a Chemical Factory 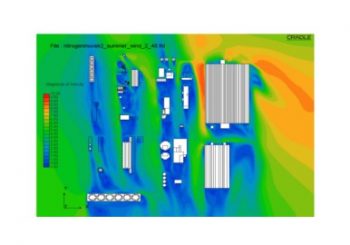 In 2012 we received an interesting fluid flow and heat transfer simulation job: a silencer had to be installed on a carbon-dioxide exhaust point of a huge chemical factory, and within this project we were asked to simulate CO2 propagation in the atmosphere of the ammonia works. But how can the area of a whole factory be modeled?

Obviously we had to simplify since the smallest area to be analysed in terms of CO2 concentration was 515 by 565 metres. This part of the factory is packed with storage tanks, pumps and other devices necessary for the technology, there are large areas where you cannot see the sky because of the immense number of pipelines above your head.

The CO2 exhaust point in question is on top of a splitter coloumn 56 metres above ground level. On the left picture below a red arrow is pointing to the outlet and you can also see the steam that comes mixed with the CO2. No, I did not climb that high up, for me it was enough to take a look around at half way and shot some pictures of the surrounding area.

Well, to create a simulation model of that size I used both traditional and modern technologies.  Many years ago a scale-model was made of the whole 2nd factory covering the place where my CO2 outlet was and I could take some photos. On the modern side there was the mighty Google Earth that even contained satellite views dated back to 2003. With its capability of measuring distances it was quite handy when measuring size of buildings.

CAD is very detailed in the neighborhood of CO2 outlet since here is the highest risk of CO2 reaching ground level in case of adverse weather conditions.

Among boundary conditions – apart from describing mass flow and temperature of carbon-dioxide (CO2 left the outlet with a speed of 61 m/s and its temperature was 60°C) – I had to set wind direction and speed, the latter one as a function of height. Defining wind direction was pretty easy because on this part of the country wind always blows from northeast according to the weather station of the factory.

As far as wind speed is concerned its change depending on height from ground level can be approximated with a power-law function:

where
Zb: height of wind speed sampling,
Vb: measured wind speed,
n: constant that stands for the a roughness category representing the surrounding area outside the simulation domain. For example large flat ground like sea has n=10, urban area with high-rise buildings close to each other has n=2.8571. [1]

Within this project several weather conditions were taken into account: winter and summer, dead calm or normal wind speed were used to calculate carbon-dioxide concentration.  Besides wind we had some other factors to take into account: there were two huge heat exchangers by the side of the splitter coloumns from which a fairly large volume flow of 40°C air was rising and this could have an effect on CO2 diffusion at certain weather conditions.

On the pictures below you can check the results of CO2 diffusion in summer at normal wind speed out. On the left there is the 0.5% CO2 concentration (which is considered to be harmful for human life) and 0.1% concentration above the ammonia factory. The plant is viewed from north-northeast, buildings and other obstacles are coloured by the pressure blowing wind generates on solid surfaces.

From these results we could clearly see that 0.5% concentration is well above the plant, with weather conditions like that there is no risk of having high CO2 concentration close to ground levels. It could also be noted that CO2 concentration reduces to harmless 0.1% above the ammonia plant so there was nothing to worry about further away from the factory.

We can extract a lot of interesting information from simulating gas or liquid diffusion. The same method as the above described can be used for air pollution simulation in cities and  I used these features for modeling leaking earth gas in case of high pressure gas pipes.